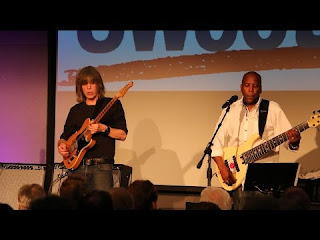 At GearFest 2015, Sweetwater & Yamaha brought together to Ft. Wayne two (2) iconic Yamaha-endorsed artists to play at the conclusion of the event - Mr. Mike Stern (Guitar) & Mr. Nathan East (Bass). They were joined by Sweetwater's very own, Mr. Nick D'Virgilio on drums (who did a fantastic job!).

All we can say is WATCH THIS 2nd song they did by Herbie Hancock ("Canteloupe Island") and you'll be VERY glad you did! And - as Nathan East's "Words of Wisdom" from Song #1 video - we all "make it up as we go along......". Simply incredible what Mike, Nathan & Nick "pulled off" for all of us to enjoy - while NEVER having played (as a group) together before! We hope you enjoy this as much as we did filming what happened on stage, that afternoon, as GearFest 2015 concluded. Sincerely & Enjoy Until Next Year, The Musician Network (TMNtv)