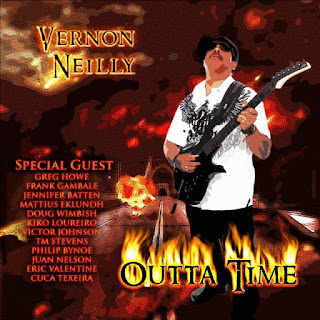 Kiko is one of the most notable rock, hard rock, progressive rock, metal players in the world today, but most of all he is a musician that plays for what a song requires.

Los Angeles, Ca. / MAY 2016 - Vernon has released his 5th solo CD entitled “Outta Time” to his international fan base and the world. This CD features some of the most prominent guitar players, bass players, and drummers in the world.

Vernon Neilly is no stranger to talent laden musical projects, and this CD “Outta Time” is no different. Vernon brings together super virtuoso and legendary guitar and bass players, to include Megadeth’s ax-man Kiko Loureiro, and others to help him to express his musical point of view. Although “Outta Time” boasts supreme musical fire power, it is far more than an exposition of world class musical abilities. The CD has a definite message for our times by means of songs like “They Don’t Care”, “Outta Time”, and the cool “Git Yo Lyfe Rite”. Strong melodies and hooks will have the listener singing along.

Vernon says, the reason why I chose Kiko for this particular song "Meta Funk Trip" is because the song that he is playing on is a mixture of Metal and Funk so his metal/hard rock chops are amazing and he did an amazing solo! With his Brazilian influence he is able to translate to rock and other styles of music. Kiko is not just a guitar player... He is a complete musician, he has a unique voice on guitar!