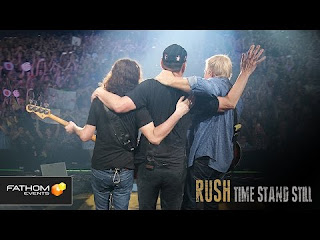 The popularity of a rock band can often be built on the road. That is how Rush did it over their 40 year history. Building a bond with their fans that has carried them through countless gold and platinum albums and, eventually, into the Rock 'n Roll Hall of Fame. But … What happens if this unique, reciprocal relationship between Rush and their devoted fans is altered…perhaps forever.. In May 2015, Rush went out for a 40th anniversary tour and it was rumoured that it may be their last tour of this kind. This might actually be the end of their life on the road. Rush | Time Stand Still is a documentary which covers the R40 tour and the special relationship Rush have with their devoted fans. Exclusive behind-the-scenes access to the band and crew throughout the tour provide the raw and vivid emotional undertones of this feature-length film. At the core of the film are Rush’s devoted fans. Their undying devotion and their quirky sense of ownership are on full display as the R40 tour comes to a crescendo in Los Angeles. Personal stories highlight the importance Rush holds in their lives and the lasting impressions of their extensive catalog. For Rush, they are quick to acknowledge the role their fans have played in their success, which makes this tour so difficult. Candid interviews with Geddy Lee, Alex Lifeson and Neil Peart bring the film to an emotional conclusion for a band who built their career the old-fashioned way. One show at a time.


Rush | The Legend of "The Bag" | Time Stand Still

Behind The Vinyl - "Limelight" with Alex Lifeson from Rush


Behind The Vinyl - "Tom Sawyer" with Alex Lifeson from Rush