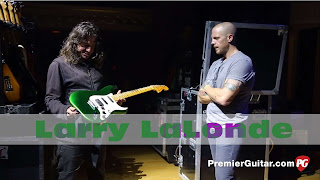 Before their double-set show (one containing hits and deep cuts while the other included playing their new album, The Desaturating Seven, from front to back), guitarist Larry “Ler” LaLonde hopped onstage to show off all his Fender and PRS guitars, detail his latest switch to Orange Dark Terrors, and he finally explains how he uses traditional stompboxes with a Fractal Axe-Fx.

“I don’t know why this became my current No. 1, but it just is,” says LaLonde about his sunburst Fender American Deluxe Strat. “Something about this guitar just makes it sound amazing.” In addition to being his go-to road warrior, he used it quite a bit in the studio to record Primus’ new album, The Desaturating Seven. All of his 6-strings take Dunlop .009–.046 strings. His guitars are typically tuned to standard, but if Larry is feeling heavy, he’ll tune down to dropped-D.

Another main ride for the band’s current tour is this custom Fender Stratocaster that is decked out in Willy Wonka & the Chocolate Factory colors because the band recorded an album as an ode to the Wilder film in 2014, so LaLonde commissioned Fender to build him some custom-painted Strats for the subsequent tour. This one sounded so good (it’s loaded with unknown DiMarzio single-coils) that he continues to use it on tour and in the studio.