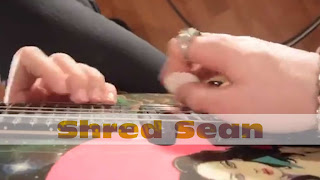 Shred Sean Solo Record
Hey Shred Heads and guitar enthusiasts I'm Sean Maier aka Shred Sean. For those of you not familiar with me, I was the lead guitar player of Blessed By A Broken Heart. I released two very cool records with them and toured the globe extensively for about 10 years. I have also filled in on guitar for bands such as Into Eternity & Kobra & The Lotus.

This campaign is about helping me bring my dream to life and making the best possible guitar record I can. Since I was a teenager, I have been obsessed with guitar and have always wanted to put out a solo record like many of my guitar idols. I would be very grateful and put my absolute all into this record to bring to you the best guitar I can play. Putting out this record is important to me because I feel like I have quality music that I'd like to share with you. I really hope you would like to hear it as much as I'd like to share it.

I already have a full album's worth of material written that I am very excited about. I want to present the music to you the way its meant to be heard and do it justice sonically. I will record it in a proper studio with a great Producer/Engineer at the helm making the mix sound incredible. Charles Kallaghan Massabo will produce the album, best known for his work with Falling In Reverse, Davey Suicide, Cry Venom, and Metro Station. I really can't do this without you guys! I really hope you'll help me achieve my dream and bring my music to life!

Where does the money go bro?
10k for 12 songs produced, mixed, and mastered by Charles Kallaghan Massabo.

Even If I do not reach the goal funding, I will find a way to put out the music! This might mean that I only can get half the album fully mixed and mastered and the other half would be demos that I send to you. NO MATTER WHAT if you contribute for a full album YOU WILL GET IT! I hope that I get the chance to release the full album produced, mixed, and mastered in its best form possible! I feel that the music and all of you deserve that, SO PLEASE HELP ME GET THERE!!!