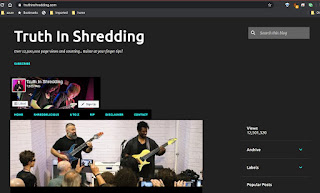 Thanks for sticking with the Truth In Shredding blog all these years. I endeavour to cover the latest in guitar from around the globe. I appreciate all those who drop by, every page view counts.

I started this as an experiment back in late 2004 and now we are now at 63380 posts. I originally thought there would be 40 or 50 players, but it's clear over the years this is a global phenomenon, so it turns out there are thousand of players and new players every day. No doubt there are players around today who weren't around when I create this blog. No doubt there are players I missed or who are just arriving on the scene. Guitar news online really existed on web sites and forums back in 2004. So originally the blog was mostly news related. I since changed my approach preferring original or improvisation performances to soloing or promo videos (unless it's to sell merch).

Videos have also changed over the years from dodgy video cameras with just a few seconds of performance, to 4K videos over an hour long. I started on Google video and gravitated to YouTube. I share videos too on the Facebook channel. It might be an age thing, but I've not really got into instagram for watching videos. A certain amount of poetic licence has been around in videos, but lately I've not been able to cope with these speeded up videos. To those who think it's a good thing, I say I have seen so many players live now that there is no point in putting out pieces that can't be played in the live setting. Indeed, I did see one of the players at NAMM, who performed live at a more sedated pace (to be applauded) but not as clean as in the videos (which are cleaned up in the studio), but better to see live than sped up.

So what am I looking for? Well an unending search for new music played from the heart, original or improvisation. May be that's you?